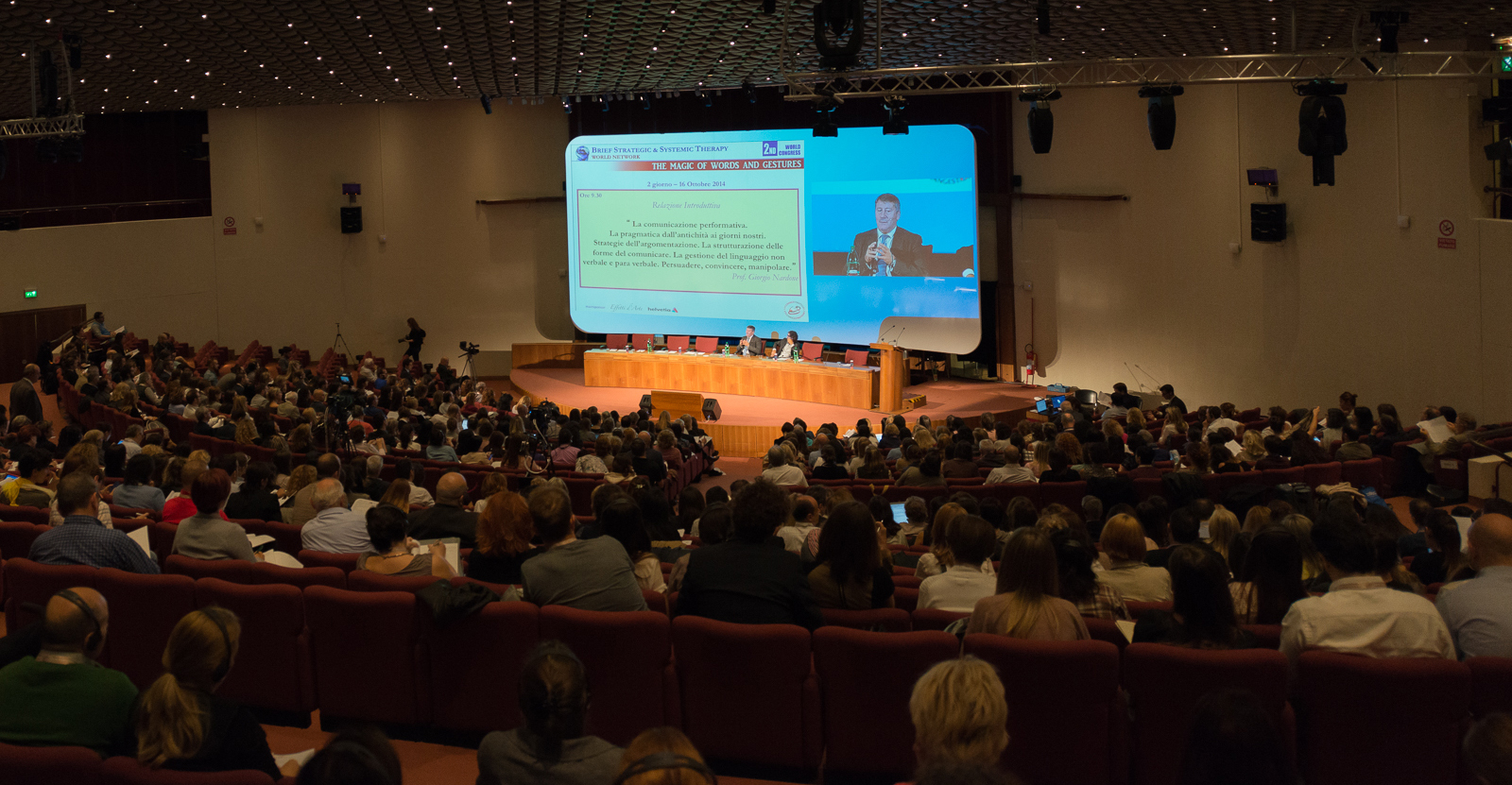 COMMUNICATION AND LANGUAGE OF CHANGE

After almost 2500 years from the great Greek tradition of the Sophists, the interest in the study of communication, as the foundation of personal, interpersonal and social construction of reality in the western world, was awakened by the work of an interdisciplinary group of scholars led by the famous anthropologist Gregory Bateson. This project, conducted during the second world war, produced numerous and important theories and applications, including cybernetics, systemic and strategic approaches to mental disorders and several approaches to the study of language and human behaviour, up to the research of the Palo Alto school. The author, who more than any other embodies this tradition and who has spread theories and practices worldwide, is Paul Watzlawick. His Pragmatics of human communication, published in 1967, has become the Bible for all those who want to study the effects of communication on human actions.

For the first time, the basic elements of pragmatics were treated, that is, the part of the study of language that deals specifically with how communication influences individuals when constructing, consciously or not, their reality. Until then, the studies on language had mainly concerned syntax and semantics, that is, the structure and meaning of utterances (De Saussure, 2009; Martinet, 1972) and only marginally its functions in terms of effects. (Jakobson, 1984). Watzlawick formulated the postulates of pragmatics and he showed its application in many contexts. He began a new era in the study of language and its effects on the reality which individuals continuously construct, suffer and/or manage.

Watzlawick’s work paved the way for different disciplines. In Linguistics, John Austin (1962) published the book “How to do things with words”, a Handbook of pragmatics where different types of languages, such as indicative and performative are identified. In psychology, studies were conducted on verbal, non-verbal and paraverbal communication (Ekman, Friesen, 1969; Ekman, 1973; Patterson, 1982; Loriedo et al., 2004). The same happened in political and managerial sciences (Beer, 1968; Rappaport, 1972) and biology (Maturana, Varela, 1980), while studies and applications related to therapeutic communication bloomed in the fields of medicine and psychotherapy (Frank, 1961; Rogers, 1951; Nardone, Salvini, 2004; Milan, Milanese, 2015).

In the early 1980s, Watzlawick proposed a more advanced and specific text on the persuasive aspects of communication applied to the change of human actions. In this text, the language of change, the author explores the therapeutic properties and influence of certain types of communication. Through many examples taken from many fields of application, the author provided a series of persuasive techniques which could modify the perceptions of individuals and therefore their actions and opinions. During the same period, the social psychologist Zimbardo published “Persuasion and Change” where he presented numerous experiments demonstrating the power and the social effects of persuasion.  A few years later, Robert Cialdini, currently considered one of the leading figures in the study of persuasion, published “Influence: the psychology of persuasion” which has become the most important social psychology book in recent years. In this text, the author illustrated, in a language accessible to the public, numerous forms and applications of the language of persuasion. He assumed that anyone should become expert in persuasion, firstly to avoid being passively subjected to events. However, Cialdini overlaid the actions of persuading, convincing and manipulating.

As often happens in Anglo-Saxon authors, this crucial distinction seems unnecessary, perhaps because of English language which is less strict in lexical and pragmatic terms than Romance languages.  It is important to remember that it is precisely in the Greek and then in the Latin world where the highest expressions of rhetoric and oratory, intended as real arts, came to light. These were considered as an essential training not only for the experts in the field, but also for all those who wanted to rise to a power role.

Since the mid-1980s, as a student and then as an associate of Paul Watzlawick, I have worked to further develop the pragmatics of human communication and language of change through research-intervention projects. These were first applied to the field of clinical psychology and psychotherapy and then to other areas such as problem solving and science of management, the world of artistic and sport performance, legal contexts and social sciences.

This work has led to the formulation of an advanced model of strategic communication that incorporates the ancient forms of rhetoric of persuasion and combines them with modern problem solving and with contributions taken from applicative disciplines, which study and use language as an instrument of change, such as hypnosis, psychotherapy, and modern neuroscience.

As an example, we introduce here two fundamental formalizations:

This formalisation of communicative techniques, already defined in 1989 hypnosis without trance, is a way “to make words magical” and it is based on the use of non-verbal, para-verbal and verbal communication.

This technique represents both the starting and finishing line of all of the research, clinical practice and managerial consulting performed by Giorgio Nardone and Paul Watzlawick for more than fifteen years at the Strategic Therapy Centre of Arezzo after its founding. It can be considered as a “finishing line” because the strategic dialogue, an advanced technique of conducting a single «therapeutic» session and able to induce radical changes in the interlocutor, represents a synthesis of all that has been achieved so far in the field. This refined strategy, which aims at achieving maximum results with minimum effort, can be considered as a natural evolution from the previous formulation of specific treatment models for particular pathologies. These consist of therapeutic stratagems and a sequence of ad hoc manoeuvres constructed specifically for different types of problems. It was the great success of such protocols in terms of efficacy and efficiency to guide us to structure the first therapeutic interview as an actual intervention, rather than as a preliminary phase.

Thus, the questions have become increasingly strategic, the paraphrasing has become highly reframing, the language have become highly evocative of sensations, and finally prescriptions have become the spontaneous evolution of a strategically constructed dialogue, rather than a forced injunction. In this way, the approach of knowing problems through their solutions, from a pure construct and research method has become an operational and strategic logic to use in the first, and often only, therapy or consultancy session.

The strategic dialogue is also a “starting line” because the refinement and experimentation of this technique, which brought to surprising effects both in promoting changes and in its possible applications in different contexts, have opened up new and promising prospects for research and intervention. In our view, this is due to the fact that the induced changes are not the product of the “expert’s directives to the “inexpert”, but rather the result of joint discoveries of two individuals through a dialogue that was purposively structured to fulfil this objective.

In this way, we completely nullify the natural resistance of individuals or extended human systems which oppose any changes in their balance even when this is discomforting or even pathological. In fact, through the strategic dialogue this limit can be transformed into a resource. The therapist, like a wise strategist, guides the interlocutor through skilful manoeuvres, to be the main protagonist of the scene, so that the latter can become persuaded of what he has come to feel and discover.

The «magic» of this technique lies in its disruptive essentiality: that is, consistent with The Wisdoms of the Hellenic tradition, “not too much, just enough».