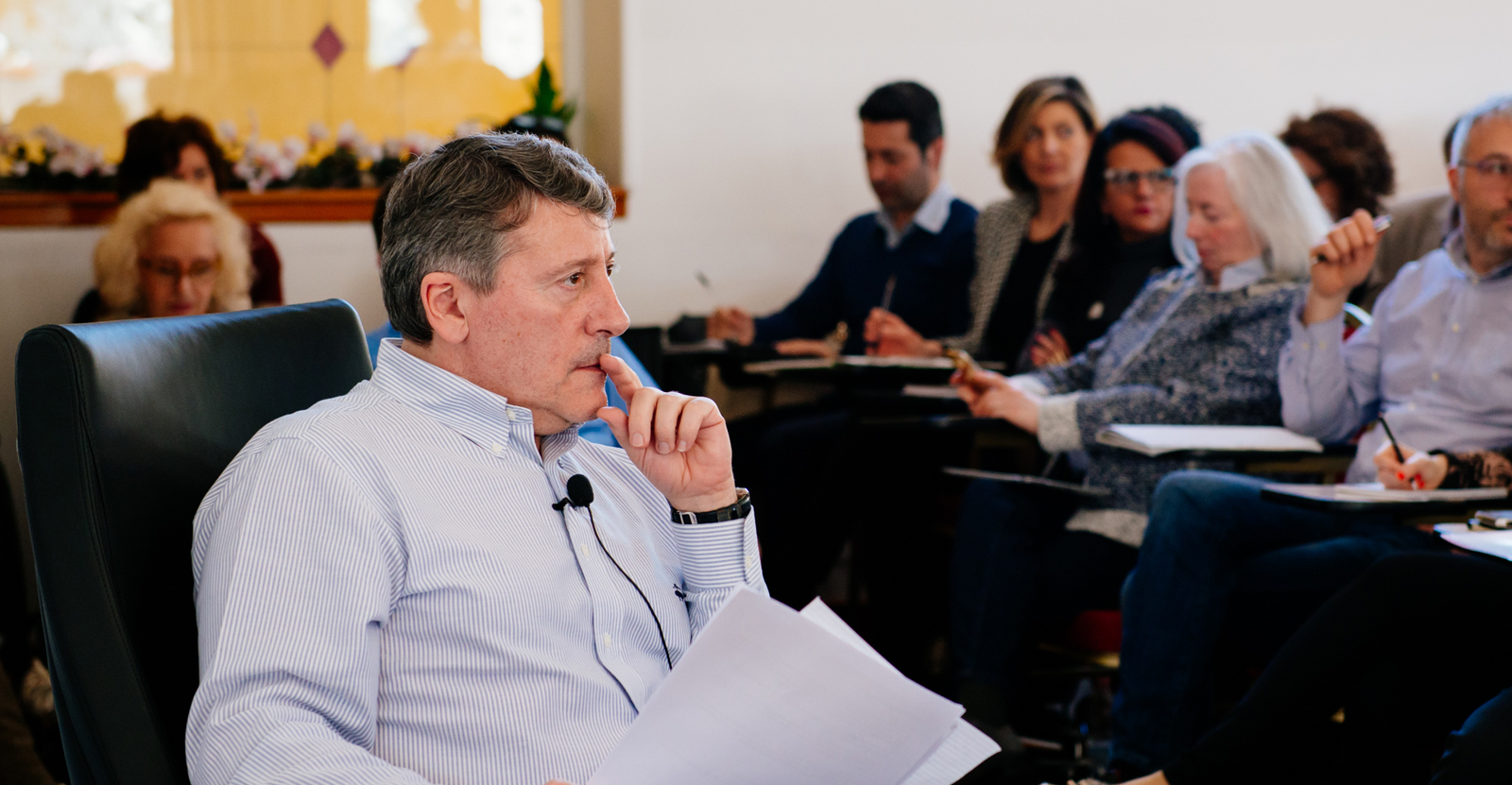 Since humans have been living on Earth and have begun planning actions aimed at purposes, they have had to deal with Logic. Whether we are aware or not, all of us use logics of thought and action whenever we want to reach a certain goal.

The history of logic, as a discipline, is born with the Hellenic world in the West and with the art of strategy in ancient China in the East. Until the advent of platonic philosophy, logic was a combination of art and science at the service of achieving various types of goals, such as winning a war or a tournament, successfully hunting a prey, persuading someone or solving complex individual and social problems. Aristotle provided the first formulation of a rigorous model of Logic, in which, however, everything that was not considered in this model, was excluded and branded as a not rigorous method. Therefore, art, creativity and, above all, non-linear dynamics (paradoxical, contradictory and circular dynamics) were excluded from rational logic although they were already recurring in human dynamics.

Since then, for over two millennia, Western thought has been dominated by the “Goddess of reason”, that is, by rationalism of which Aristotelian logic was the main tenet.

In fact, in academic philosophy, traditional and rational logics are still considered as the essential reference point of thought and action planning and non-linear and non-ordinary logics are once again excluded from this context.  Curiously, if we analyse the constant dynamic that each of us lives with themselves, others and the world, we perceive that reason and rationality are not predominant, instead contradictions, paradoxes and beliefs wholly dominate, that is, everything that can be defined as logical ambivalence.

Throughout the centuries, only few authors have dealt with the logic of ambivalences, although these underlie the most frequent interactions between humans. For this reason, people who have worked on developing winning strategies have always gone beyond the limits imposed by strict formal logic.

Strategic logic is an action planning model based on the objectives to achieve and problems to solve, rather than on respecting the theory of reference. This type of logic has always considered the phenomena of logical ambivalence and used paradoxes, contradictions, prophecies and self-deception as actual operational tools. Only towards the middle of the last century, some scholars have started to bring attention to this form of logic, which, although it is so influential for the life of human beings, was excluded from academic studies. The Palo Alto school has the indubitable merit of having showed the importance of non-linear dynamics: “circular causality” has replaced “linear causality” and communicative paradoxes and self-fulfilling prophecies have been identified as the building blocks of many important relationships between human beings and their reality.

Giorgio Nardone, as a direct student of Paul Watzlawick, the most famous “Master” of the Palo Alto school, not only has embraced this tradition of studies, but he has further developed the models of non-ordinary logic through his work and his formulations.  In fact, he structured a theoretical-applicative model of the logic of ambivalences which is divided in: self-deceptions, paradoxes, contradictions and beliefs. These in turn are divided into 13 different dynamics of non-linear logic. All this is included within a model of strategic-logic which allows people, given a problem, to build rapidly an effective solution thanks to the use of non-ordinary logical stratagems. These were already used in Ancient Greece and China and, despite the advent of Aristotelian logic, they have been used continuously, in the history of mankind, by artists, scientists, leaders and managers.

In other words, Giorgio Nardone has the merit of having formalised a proper model of strategic logic, which respects the criteria and the rigour of scientific research and, at the same time, facilitates inventiveness and applicative flexibility and the use of expedients that violate ordinary logic. Thanks to all this, what originally was an artistic approach, has become a real Problem Solving technology, as the strategic solution models developed for different classes of problems have evolved and become not only increasingly effective and efficient by virtue of their progressive refinement but also replicable, communicable and predictive in their effects.

“The secret is that there are no secrets”, a creative invention is not a stroke of genius, but the analysis of a problem that allows the therapist to view it from non-ordinary perspectives. As Alexander Fleming teaches us, “chance favours only the prepared mind.”

The famous epistemologist Karl Popper (1972) indicated that the process of scientific research and the phases that lead to discoveries are the following:

This can be considered the basis of any problem-solving process; therefore, it is nothing but a rigorous method for finding solutions to problems according to the phases that are followed in scientific research processes. However, while science has the responsibility to explain the phenomena that are object of study, problem solving is the “technology to find solutions”, that is, the methods that allow to reach the specific goals of a project.

The strategic problem solving evolves based on what was reported above and adds some techniques that contemplate the use of non-linear logic to the usual scientific process in order to facilitate the discovery of new perspectives that allow people to find solutions to what seems unsolvable.

The outlined sequence is:

As the reader can verify by comparing this scheme to the previous one, there are three original techniques that have been added to the usual procedures of pure cognitive research: the “scenario over the problem” technique, the technique of the mountain climber and the “how to worsen” technique.

THE SCENARIO BEYOND THE PROBLEM

The implementation of this technique consists of asking a person to imagine how the perfect scenario would be once all the current problems and difficulties had been completely overcome. In other words, a person is asked how the scenario would be compared to the current situation once the problem had been fully resolved or the goal fully achieved. We must convince our minds to imagine what the characteristics of the ideal situation would be after the strategic change had been realised.  This may seem like a work of fantasy, but it is a way to observe the characteristics of the “ideal reality” to reach, which often allows us to see things that we were not able to understand. It is not a coincidence that this was one of Leonardo da Vinci’s favourite mental strategies. As for him, also in our case this technique is used to unleash pure imagination, to select the aspects that can be concretely achievable and then to start acting in this direction.

This mental strategy clearly represents the application of a reverse logic compared to ordinary logic, since it involves the implementation of a sequence of acts which are apparently against common sense. That is, once the objective to achieve is clarified, thanks to the application of the previous technique, a person must imagine backwards the sequence of steps up to the starting point, rather than starting from the initial point and building the sequence of steps up to the point of arrival, as it would appear more “reasonable” according to a linear rationality.

Its name comes from what expert climbers have done for thousands of years. When planning the most suitable route to reach a summit, mountain climbers start from the top and build backwards, step by step, the trajectory of their climbing. (See the chart). As it can be seen from the two pictures, this technique allows a person to break up the objective in a series of micro-goals up to the identification of the smallest step to take in order to start applying the strategy of change. This counterintuitive procedure allows us to bypass our prejudices and fixed schemes, which keep us from finding alternative solutions to those that brought us to fail. Never forget Leonardo da Vinci’s words: “there is nothing more apt to deceive us than our own judgement”.

THE “HOW TO WORSEN” TECHNIQUE

This original technique is an essential part of the strategic problem solving model formalised by Giorgio Nardone and represents a kind of “trump card” against seemingly immovable situations. This consists in asking ourselves what actions we would need to perform or avoid to voluntarily worsen the current situation, which, on the contrary, we would like to improve. Similarly, we can ask ourselves which things we should voluntarily think and/or avoid thinking to deliberately complicate these problems, rather than lead them to their solution. After that, we make a careful list by writing down the most important things first and then the less important.

This may seem an absurd question, given that the subjects would like to improve their condition by solving their own problems. However, this is a form of strategic self-deception based on the logic of paradox: “if you want to make a thing straight, try first to bend it even more”.
The reader needs to know that if I really try to think of all the ways to worsen my situation, the effect will be of two types. I will Identify a range of counter-productive actions, which I will immediately start to dislike. And this, of course, will lead me to avoid them.

The second effect, even more surprising, is that the mind, pushed toward that direction, will bounce, like a spring, towards its opposite. That is, I will start seeing the situation from other points of view and often I will be able to devise solutions that I was not even able to consider before.

It is no coincidence that all the greatest scientists in history, from Archimedes to Edison, have made extensive use of this mental strategy to increase their ability to invent. As William James, the first great modern psychologist, wrote: “genius is nothing other than the ability to perceive things from a non-ordinary perspective”.

Over the past twenty-five years, this model of logic, in addition to the formulation of effective and efficient validated treatment protocols of brief strategic therapy, allowed us to successfully intervene in non-clinical contexts, especially in the world of art, military and sport performance, both at an individual and a team level. As this theoretical-applicative development allowed us to apply the model to the world of productive organizations, we intervened in several private companies and public institutions and we have worked within these organisations towards the solution of their complex problems, as well as trained their managers to become effective problem solvers.